Erwin Hymer Group study: This is how Europe camps

The Erwin Hymer Group (EHG) wanted to know exactly: How do "Caravanning Cultures" differ within Europe? To find out, more than 3,800 campers from nine countries were interviewed in the spring of 2018.

Motorhome travellers as well as campers were interviewed in the online survey conducted in the spring of 2018 on behalf of the Erwin Hymer Group. There were clear differences: While mainly British (72%), Dutch (56%) and Swedes (53%) like to take the caravan on the tow hitch, it is the other way around for the Italians. Eight of ten camping fans swear by camper van or motorhome on holiday. By contrast, the ratio is almost balanced across Europe.

The age is almost identical: Europe's average camper is 43 years old, lives in a three-person household and is an employee.

Destinations: Shared dream of the Mediterranean

Europe's dream destination is the Mediterranean (59%) and ranks first in almost all countries. This even applies to Swedish campers - despite having to travel at least 1,500 kilometers. Only the British are more attracted to their own destinations. Apart from the Adriatic and Riviera (69%), Italians in particular also appreciate the large lakes (35%). Germans, on the other hand, prefer the North and Baltic Seas (45%). Striking is also the yearning of the Dutch for the high mountains (31%) as a contrast to the flat homeland.

There are also major differences in the duration of the trip: While Dutch, French and Swiss travel on average for just under 14 days, the holiday for the British lasts only seven days - and for Italians, Norwegians and Swedes, about ten days. Pronounced long-term vacationers can be found among the French: In the last three years 37% have experienced a camping holiday that lasted longer than 15 days. 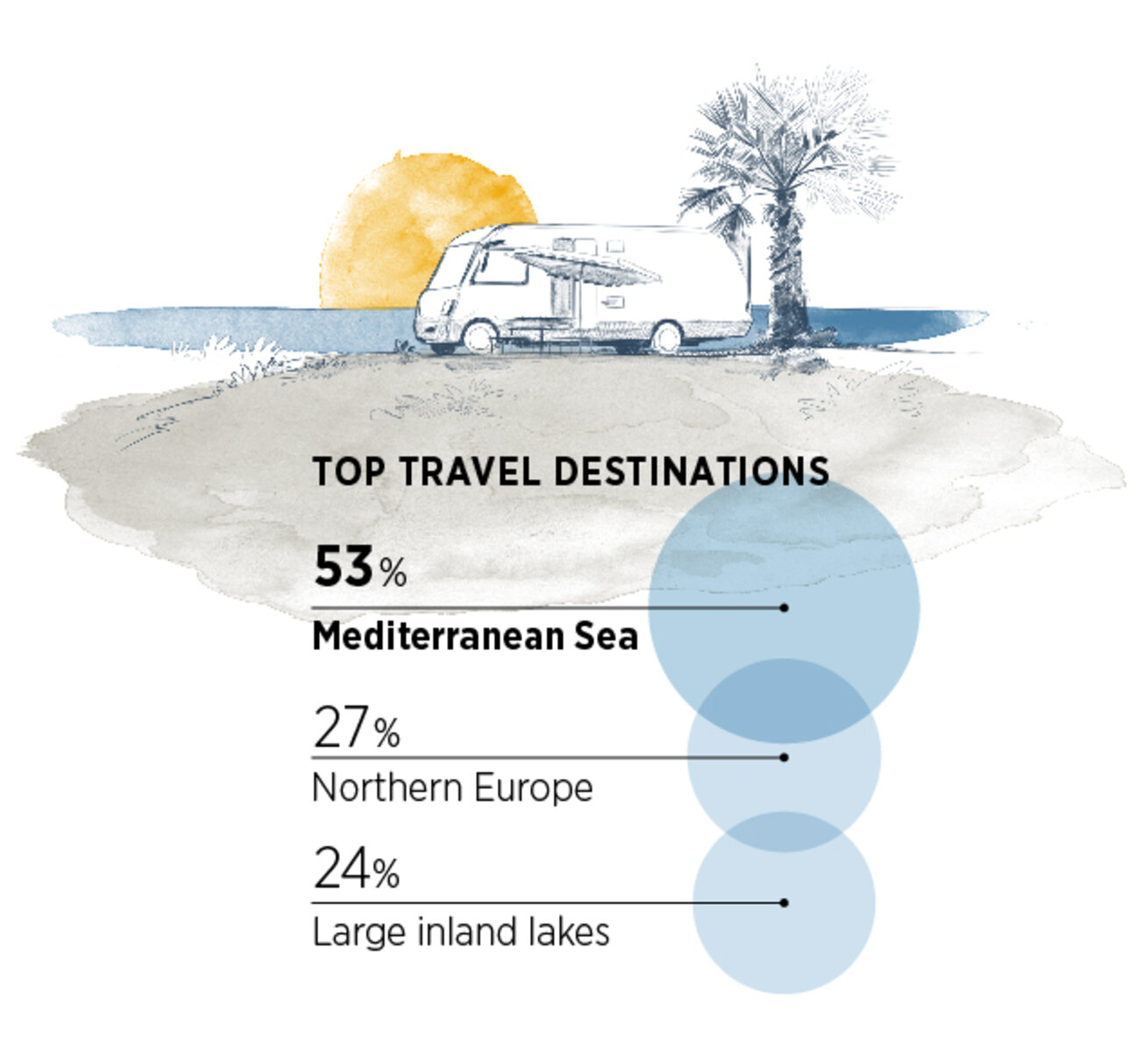 The goal: Kick back and relax - with different emphasis

Rest and relaxation top of the list for holiday activities (89%), followed by on-site excursions (83%) and sightseeing (77%). Italians in particular are not bored: They are interested in excursions as well as fitlness and sporting or cultural activities such as museum visits. Italians like to travel with friends or join guided tours. They share the passion for cycling with the French. On the other hand, British, Swedish, Swiss and Austrian vacationers are particularly relaxed.

Especially Dutch and Italians are more likely to approach their camping neighbours - which is rather foreign to Austrians and Swiss. Generally, however, when it happens contacts are made actively or they are established. 66% of respondents agree with this statement.

No stress on holiday - as a couple or with a family

61% of those surveyed think that common camping holidays bond couples or families together. Especially French (71%) and Italians (69%) can confirm this. The composition is quite different: At least one child is on board in 52% of all campers - especially with French, British (60% each) and Italians (55%). 11% of British campers even travel with more than two children. In contrast, 31% of all respondents travel as a couple - especially Germans, Austrians and Swiss like the togetherness in motor homes or caravans.

We wanted to know how Europe's campers tick, where there are similarities and differences. The results of the study help us better align our offerings to the needs and desires of our target groups in the future.

Not only during summer

Although camping is primarily associated with summer and sunshine, winter camping is finding more and more participants. 35% of Europe's campers have already had that experience - 80% say they would like to repeat it. Camping in the snow is rather something for younger people and more popular with the French and Swedes than with Austrians or Swiss - who have the ski regions right on their doorstep. After all, 42% of those who have not been traveling with a caravan or mobile home in the cold season are curious about winter camping. This is especially the case for Italians and British people.

Preferences are also different when it comes to equipment requirements: French people value a microwave oven. This is also true for English people and Swedes, who also have an oven on their wish list. For the Italians, the largest possible kitchen area, air conditioning and the largest possible double bed are more important than for other nationalities.

Speaking of bed: Opinions differ sharply regarding floor plans. With the exception of Germany, where the transversal bed is preferred – Europeans desire a double-sided accessible queen bed (45%). But while longitudinal single beds are also accepted by Swedes (25%) and Austrians (23%), this arrangement is not the case in France (12%) and Italy (14%). For Austrians and Swiss, the largest possible bed is particularly important. 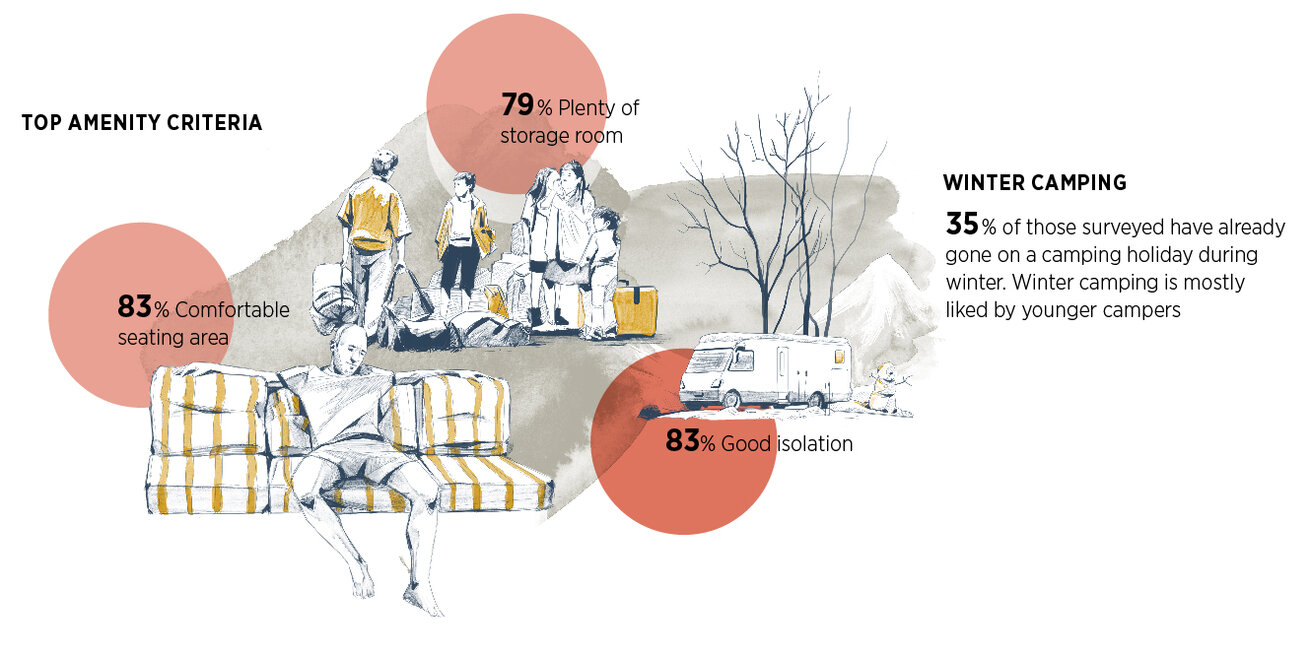 Almost one-quarter of the respondents could imagine renting their new or current vehicle commercially, 11% already having experienced doing so. The French are particularly attracted to renting, while the majority of Germans, Austrians and Swedes would only lend to family or friends. However, the willingness to rent is mainly dependent on age: 17% of people under the age of 29 have already rented their own vehicle and 31% could imagine it. For the campers of tomorrow, sharing could thus have significantly greater importance. 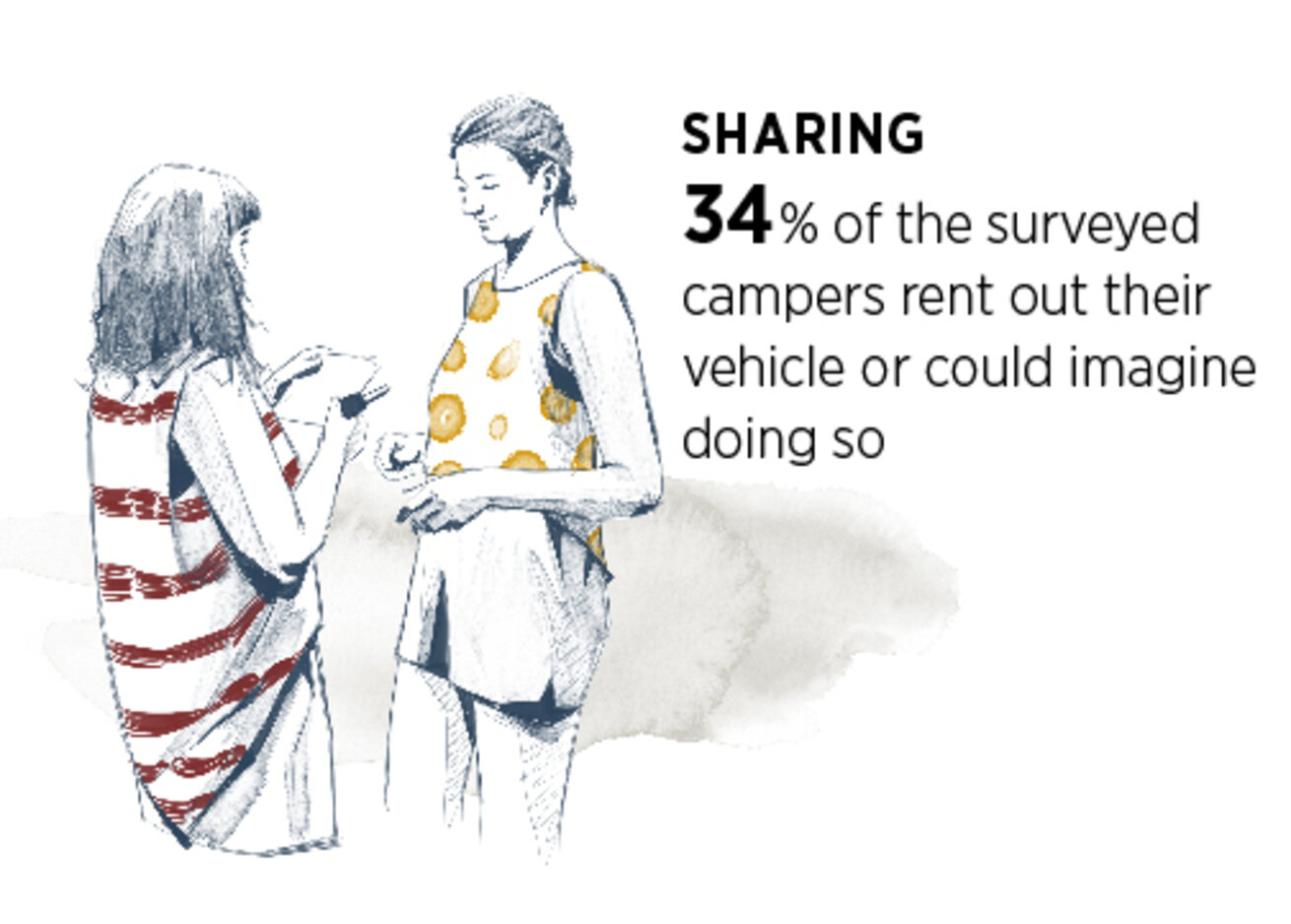